Bound Feet Blues, the BOOK, explores the theme of performance in theatre and in our every day lives, using the metaphor of bound feet and fashion. Writer/ performer and author of the book, Yang-May Ooi, explains why performance fascinates her.

Bound Feet Blues, my memoir in book form, opens at my first staged performance of the theatre version of the Bound Feet Blues story. The first chapter describes what it felt like for me to step out in front of an audience under the spotlights to perform the story of my family and my own life.

That first performance at Conway Hall described in the book was captured on video – highlights below:

We sometimes mistake performance or acting as inauthentic. We think that acting means pretending to be someone that we are not. Of course that is factually true when actors play a fictional role or are portraying a real person on film or in a play but even then actors always seek to be real and honest in the emotions that they depict. For me, portraying myself and my family on stage, it was deeply important to be authentic to my own story and also theirs. The emotions and story I portrayed were real and truthful within the frame of the drama.

The experience of that performance made me reflect on the performance of my self over the last few decades.

In the book, Bound Feet Blues, I write about how I “performed” the role of a Bright Young Thing in my student days in Oxford, going to balls and dressing as a beautiful “China Doll”. Later, I “performed” the role of a high-achieving lawyer in London in the yuppy atmosphere of the ’80s. When I came out, I “performed” as a boyish lesbian in baggy chinos and lace ups. It was only after all this experimentation that I finally came to be able to express who I really am – a mix of feminine and masculine, sometimes high powered, sometimes slobby and lazy, sometimes beautifully dressed, sometimes not.

Yang-May Ooi at Pride “performing” the tomboy self. This photo is one of many in her book, Bound Feet Blues

How do you “perform” different aspects of your character?

We all perform who we are to some extent. Think about how you show END_OF_DOCUMENT_TOKEN_TO_BE_REPLACED

Writer/ performer Yang-May Ooi will be featured at the Oxford Literary Festival in a solo event as part of the St Hilda’s Writers Day on Saturday 09 April. Yang-May will perform an extract from Bound Feet Blues and talk about Doing the Unimaginable – how and why women in China practiced the brutal process of footbinding on their daughters for a thousand years. 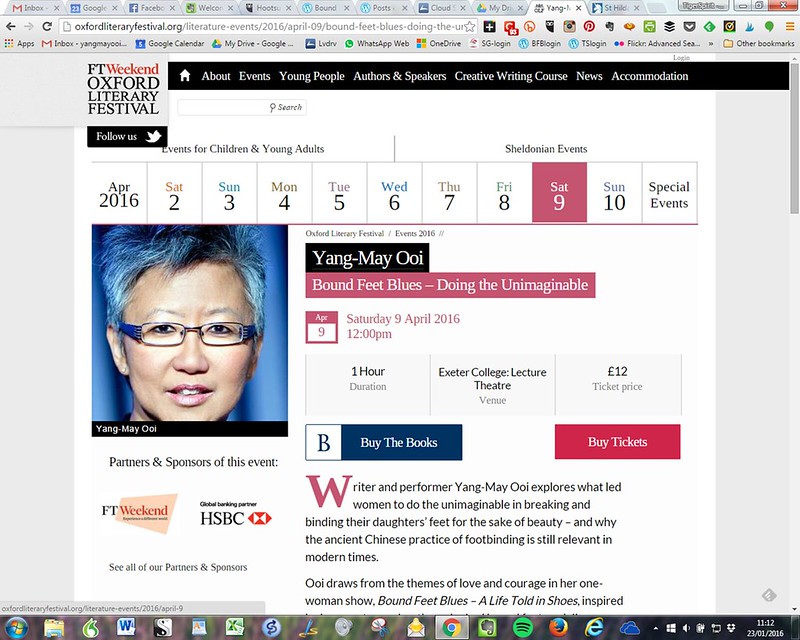 I’m delighted to have been invited back to Oxford by my old college St Hilda’s as part of the Oxford Literary Festival. Bound Feet Blues opens in Oxford as I stroll across Magdalen Bridge from St Hilda’s to a summer ball with a gang of my friends in our ball gowns with our boyfriends in black tie. So it feels just perfect to be heading back to Oxford to talk about my show and the accompanying book of the same name.

The brutal practice of footbinding is unimaginable to us today but was the norm for women in ancient China. In her one woman show Bound Feet Blues – A Life Told in Shoes, inspired by her great-grandmother who had bound feet, writer/ performer Yang-May Ooi explores what led those women to do the unimaginable in breaking and binding their daughters’ feet for the sake of beauty – and why footbinding is still relevant in modern times. In this talk for St Hilda’s Writers Day, she draws from the themes of love and courage in her theatre piece to discuss what it means to do the unimaginable as mothers, daughters and creative artists today. Yang-May will also be performing a short extract from the show.

There’ll also be the chance to buy a copy of the book – and I’ll of course be around to sign your personal copy. 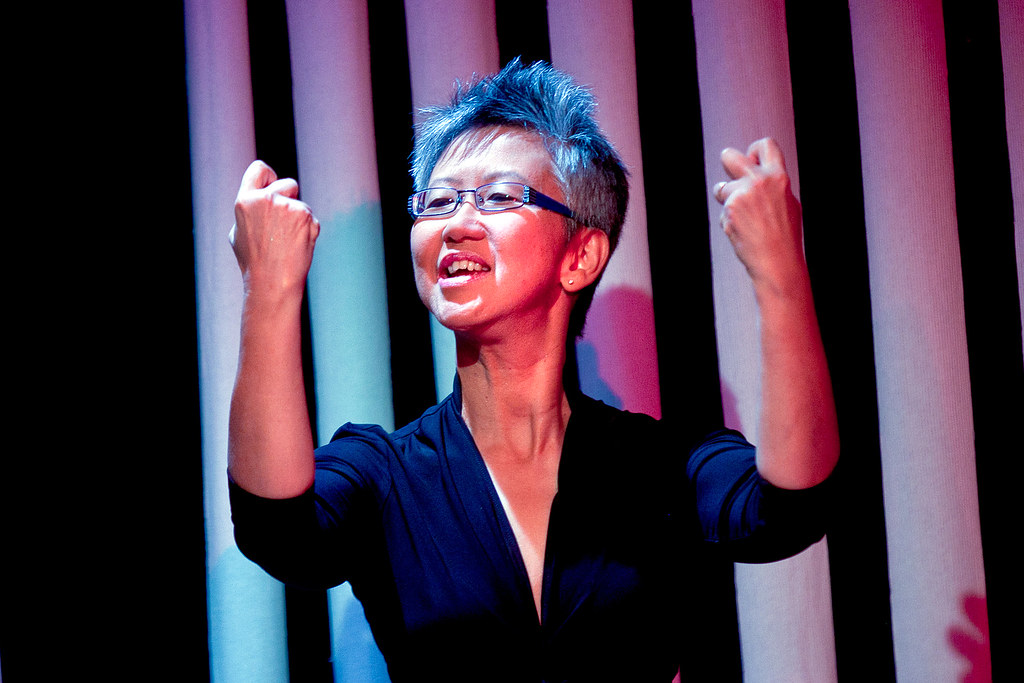 If you’re in the Oxford area on Saturday 09 April, it would be lovely to see you at this one hour event. If you’d like to say hello afterwards, please do drop me a line and I’ll keep an eye out for you – or just come up and say “hi”.

If you know anyone in the Oxford area who might be interested to come along, please do tell them about the event. It would be great to see some warm and friendly faces in the crowd.

If you can’t make it you can still END_OF_DOCUMENT_TOKEN_TO_BE_REPLACED

Writer/ performer of Bound Feet Blues, Yang-May Ooi, will be speaking about bound feet and what it means to be a woman at the WI (Women’s Institute) East Dulwich SE22 on Wednesday 03 February 2016.

I’m delighted to have been invited to speak at the WI at the Literary Evening with Local Authors. Here’s the line up for the evening;

Lloyd Shepherd is an author of three historical thrillers, The English Monster, The Polished Island and Savage Magic.  He will be speaking to us about his latest book, Savage Magic.

Yang-May Ooi will be presenting on her newest book, Bound Feet Blues which is a story told through the shoes she has worn in her life. Yang-May is also author of the best selling novel, the Flame Tree.

Rebecca Mackenzie will be reading an excerpt from her debut novel, In a Land of Paper Gods.

Harry from Dulwich Books will also be joining us with the above mentioned authors books as well as a selection of their top picks.

I’ll be talking about why bound feet are still relevant to us today as modern women in the West and how feet and shoes can invite us to think about what it means to be a woman.

I’m also looking forward to meeting the WI members and hearing the other authors talk about their books. It’s going to be a fascinating evening.

It’s a private WI event – if you’rea member it would be lovely to see you there. If not, you can enquire END_OF_DOCUMENT_TOKEN_TO_BE_REPLACED