How does a woman with bound feet “run away” from her family?

This is the question that has haunted me ever since I was a child when I heard the story of my great-grandmother who had bound feet.

Here is the story that has been passed down in my family, which I pieced together from different family members:

Great-grandfather was a hospital orderly in Taiping (a small town in Perak in Malaysia) when he came across a young woman with bound feet who  had been admitted to the hospital. He found her charming and nursed her back to health. When she was well again, she made him a special cockerel soup that traditionally, brides made for their husbands. He took that as a sign that she was also in love with him so he asked her to be his wife.

No-one knows how she came to be in Malaya (as Malaysia was then known). It is said she had been previously married in China – but she couldn’t give her husband any children so the family she married into bullied her. And she ran away.

Those three simple words. “She ran away”.  How do you “run away” on bound feet? What courage it would have taken to have set off into the unknown on those tiny, unsteady feet.

More than that – for a woman in the early 1900s, what did it take for her to defy tradition and break her marriage contract? Such an action would have reflected on her own family and her husband’s family as well as her personal reputation.

And what a strong sense of self she must have had to put herself and her own happiness first above all the expectations and obligations within that culture as to what a wife should be and do – and above that strong Chinese value of “saving face”.

In the only photograph we have of her, she seems a small, serious young woman, her tiny feet peeping out under her pantaloons – not an obviously feisty rule-breaking rebel. That makes her story even more extraordinary. 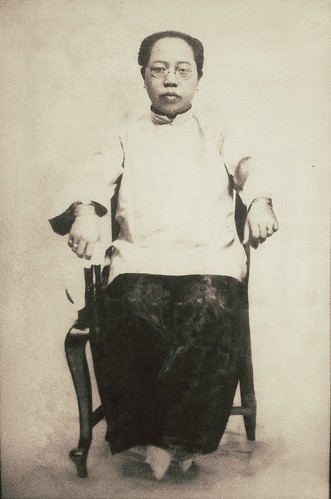 In Bound Feet Blues, I retell the early part of her story before she arrives in Malaya. I don’t know how she ran away – whether someone helped her, whether she took a carriage, whether she went on foot. My aim is to bring to the fore the willpower and drive that made her change her destiny. So I create a stylised reconstruction of her escape in the show – I wanted the feel of those folk ballads, which recount a simple tale but give it a mythic quality because it feels important to underscore the epic quality of her courage and determination. I hope what I have written honours her and her brave spirit.

Photo 1: traditional Chinese wedding – from People’s Daily China  with thanks

Photo 2: my great-grandmother, from my own archive

Yang-May Ooi is an award-winning TEDx speaker, bestselling author and story performer. Her work uses the power of personal narrative to inspire women to grow into confident, collaborative leaders. She is currently rehearsing a one woman story performance, Bound Feet Blues, which will be showcased in London’s West End in Oct 2014.